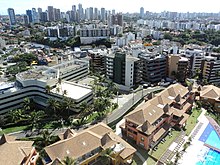 The purpose of this high-level study was to assess existing conditions and make recommendations on improvements to achieve increased E-government, network, and IT capacities across several data centers in Salvador, Brazil. The data centers analyzed are owned and operated by the state of Bahia, and support various government agencies such as finance, security, and transportation. CSIE was tasked to perform site surveys on the three largest data centers and based on our findings, produce conceptual designs on each.

The conceptual designs addressed improvements to the physical space, mechanical, electrical and fire protection systems. These improvements took into account:

·        The existing state of the infrastructure

·        The mechanical and electrical capacities required to support projected IT hardware

CSIE was responsible for compiling the projected IT hardware based on interviews with data center stakeholders. These projections were translated to space requirements and mechanical and electrical loads, and CSIE’s architect and engineers developed conceptual floor plans, one-line diagrams, and riser diagrams accordingly. The narrative explaining these recommended improvements was accompanied by cost estimates for budgetary purposed.